The kind of cabbage you buy will make a big difference in your final dish. Each has a slightly different texture, colour and flavour-profile. We break down the different varieties commonly found in Australia and let you know which ingredients to team them with. 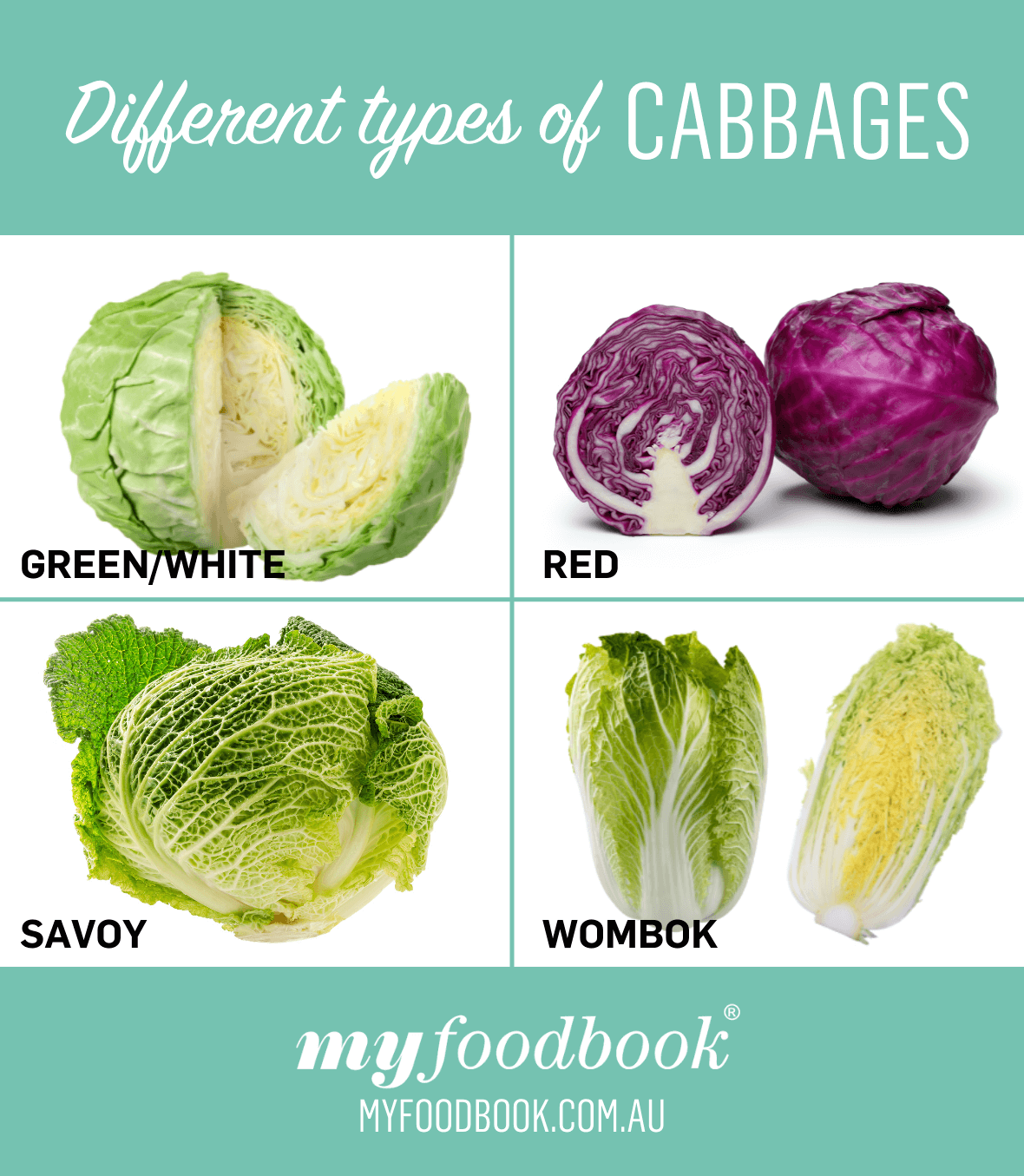 The most common kind, it has a spherical shape and a mild, peppery flavour that mellows during cooking. It's also called white cabbage. It’s a versatile vegetable that can be eaten raw or cooked. Stuff and braise it as cabbage rolls, shred finely for coleslaw, or pickle and ferment it for sauerkraut. Bring out its natural sweetness by using high heat methods of cooking, such as stir-frying, sautéing and roasting. The sulphurous smell given off during the initial phase of cooking will dissipate. Generally, the core of the cabbage isn’t eaten as it’s too tough and the pale, the outer leaves are also discarded because of their thick, waxy texture.

Similar to green cabbage, it has a spherical shape but the leaves have a distinct crinkly, lacy texture. The green outer leaves are delicate, whereas the pale yellow inner leaves are firm and crisp. It’s a versatile vegetable that can be stuffed, grilled, braised and also used in raw in salads. It has a mild, sweet, neutral flavour with less of the peppery notes associated with green and red cabbage. Because of this, savoy cabbage is extremely versatile – it's as good a match for salty and rich meats such as pork and duck as it is for sweet and mild seafood.

Otherwise known as Chinese cabbage, it has a long oblong shape and the leaves range from pale green to light yellow and white. As with the other varieties of cabbage, wombok can be eaten raw shredded in salads, as well as added to stir-fries, braises, stews and soups. When eaten raw, wombok has a crisp texture and a mild peppery flavour. Once cooked, it softens and gets sweeter. It also takes on the flavours of the other ingredients its cooked with. Grown primarily in China, wombok is the ideal cabbage choice for Asian dishes.

This one is easy to spot, thanks to its eye-catching reddish-purple hue. It has a tight round head and waxy, crunchy leaves. It boasts a more pronounced peppery flavour than other cabbage varieties, yet also has floral notes that tend to mellow out and become sweeter after cooking.

It can be eaten raw in salads and slaws, fermented and pickled or sautéed, simmered, roasted and braised. Red cabbage pairs well with sweet and sour flavours, such as apples and citrus. It is particularly well-matched with pork dishes. Spice such as cinnamon, cloves, nutmeg, and juniper berries are also complementary. This is the only variety that will change colour once cooked. When paired with neutral liquids such as water or stock, the cabbage will turn dark purple and even bluish. Cooked in an acidic liquid such as lemon juice, vinegar or wine, the cabbage will retain its reddish-purple colour.

Learn how to use affordable cabbage in lots of different ways! Get more recipe inspiration with the cabbage ideas below.

GET THE RECIPE: Vegetable Cabbage Rolls

You can use green or savoy cabbage for these comforting cabbage rolls. Full of a hearty mixture of mushrooms, grains and vegetables and simmered in tomato soup, this is one meal that will warm you on even the chilliest night.

Red cabbage gives this noodle salad a vibrant pop of colour and a deliciously peppery note of flavour, if you can't find red cabbage you can also use green.

GET THE RECIPE: Chicken Okonomiyaki

There's a surprising amount of cabbage in these savoury Japanese pancakes. The recipe calls for pre-shredded coleslaw, but you can shred your own green cabbage to keep it even more budget-friendly.