Gone are the days of only white mushrooms in the supermarket, nowadays in Australia there’s a menagerie of mushrooms in different shapes and sizes. Check out our guide with pictures and descriptions of 12 common types of mushrooms and how to cook with them.

What are the different types of mushrooms?

Button, cup, and flat mushrooms are all the same type of white mushroom, just harvested at different stages. Button mushrooms are harvested the earliest, and are usually the smallest. They have the most delicate flavour of the three, and they’re great raw or cooked as
whole mushrooms.

Cup mushrooms are harvested when the mushroom cap opens partially from the stem. They are usually a bit larger, and they have a slightly more intense flavour than button mushrooms. They’re also great raw or cooked.

Flat mushrooms have a “flat” cap that has completely opened. Also called field mushrooms, these mushrooms’ large size makes them ideal for barbecuing, stuffing or enjoying as a meat substitute. They have an intense meaty flavour, and are best eaten cooked rather than raw. 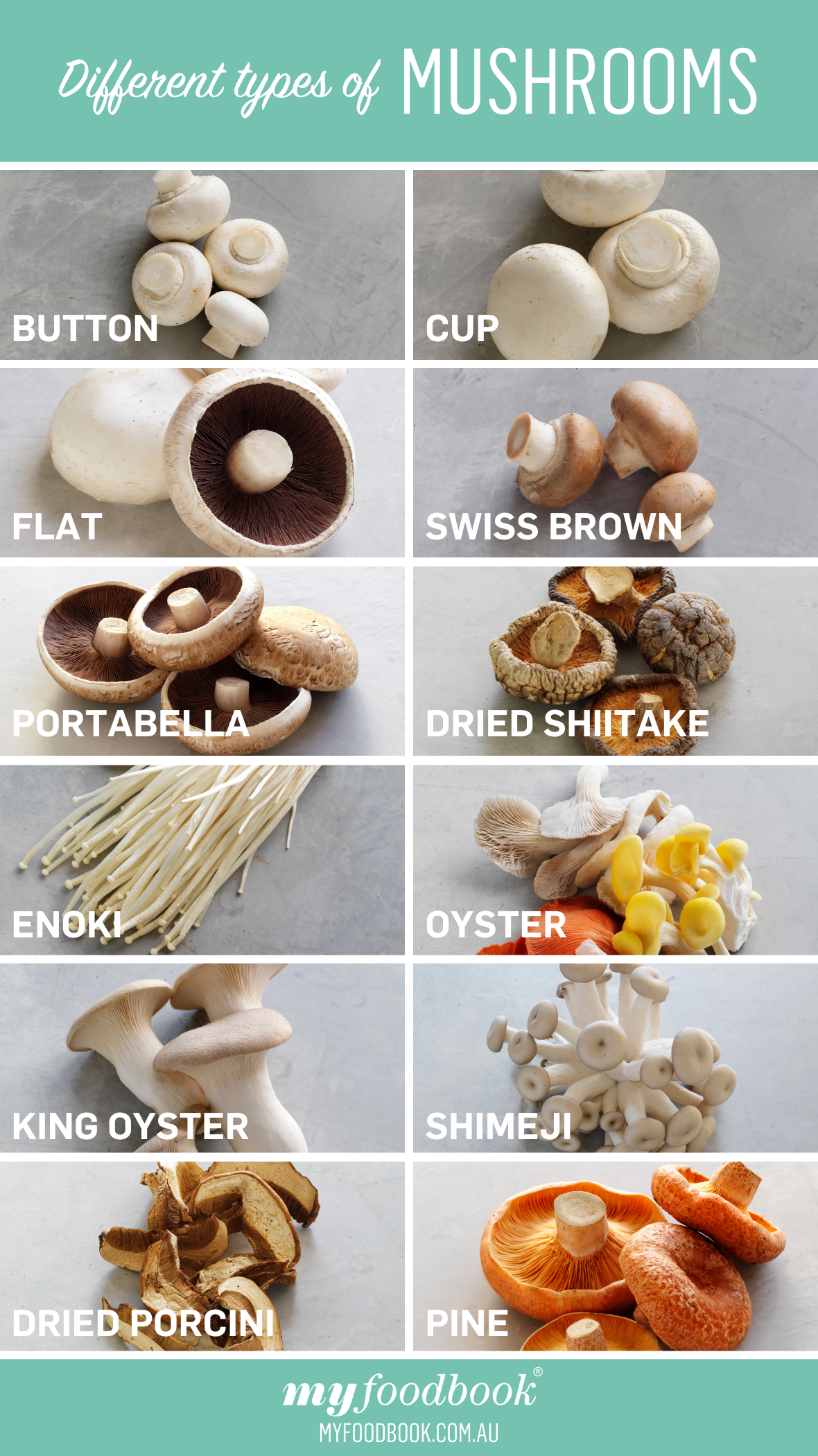 Swiss brown mushrooms are tan in colour rather than white. They have a slightly more robust flavour and firmer texture than the above mushrooms. Enjoy raw in salads or cooked.

More mature Swiss browns with an open cap. These hearty brown mushrooms have a robust flavour and texture. Ideal to be used in the same way as flat mushrooms.

Popular in Japanese and Chinese cooking, shiitake mushrooms have a distinct fragrance a flavour. They are tan to dark brown in colour. They are available dry or fresh, and have a smooth and slightly chewy texture when cooked. Shiitake’s strong flavour makes them especially good for flavouring stocks and broths.

Enoki mushrooms are prized for their long stems. They are pale cream in colour with very long, fine stems and tiny caps. Enjoy their nutty flavour either raw or cooked. They maintain a slightly crunchy texture when cooked and are popular in hot pots, soups and noodles.

So-called because of their oyster-shell shaped cap. Sometimes called pearl oyster mushrooms. Their gills extend to their stem and they have a tender, silky texture. They are available in many colours. Their mild flavour makes them ideal for stir-fries, soups and noodles.

These mushrooms have a thick, fat stem that is often eaten sliced and pan-fried or barbecued. They have a meaty stem that is quite different to soft oyster mushrooms.

These mushrooms have long, thick edible stems and smallish caps. They have a bitter taste when raw and must be cooked. Once cooked, they retain a bit of crunch and have a mild, nutty flavour.

Also called cep or penny bun, in Australia they are most often available chopped and dried in packets. They are a wild mushroom with a very intense flavour. They’re often used in pastas and risottos. You can find them in the supermarket near the garlic and onions or near the deli.

Also known as saffron milk caps, these wild mushrooms are common in parts of Australia. These bright orange mushrooms have a distinctive rich and nutty flavour. You can find them fresh in speciality grocery shops.

Now you’ve had an introduction to a few different types of mushrooms, it’s time to try them out! Mushrooms are at their peak during Autumn, and the weather is just right for cosy dishes like mushroom soup, creamy mushrooms pastas and risottos.
Don’t forget you can save these recipes to your myfoodbook ecookbooks with your free account! Login and start saving, or create an account.

Get the recipe: Garlic Mushrooms and Chives Dutch Baby

Saute Swiss brown mushrooms in garlic and butter to make a gorgeous filling for a fluffy Dutch baby!

Get the recipe: Chicken, Mushroom and Zucchini Pasta Bake

Cheesy, creamy and full of umami mushroom flavour. This cosy recipe is ideal for autumn mushrooms.

Use large flat or portabella mushrooms so you can fill them with plenty of this delicious savoury mince recipe.

This gorgeous red Thai curry is full of meaty and flavourful shiitake mushrooms, tender eggplant, broccoli and more. It's such a tasty way to enjoy more vegetables.